How To Win In Madrid 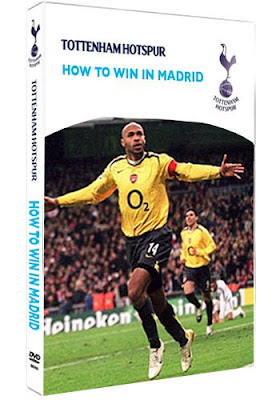 Does This Kid Remind You Of Jack Wilshere?

Every time I see this Disneyland advert I can't help but think of Jack Wilshere.

About 12 seconds into the clip there is a little kid dancing about on the bed wearing blue and white checkered pyjamas.

My girlfriend can't see it but for some reason he really reminds me of Jacky boy!

I dunno if its the fact the child looks a little cheeky, and his barnet looks a little like Wilshere's does, but I think there is a resemblance there.

I swear if Jack scores this season and celebrates his goal like this boy celebrates going to Disneyland then I will piss my knickers.

Does anyone follow him on Twitter? If so could you pass a message on to him and see what he thinks.

Am I Bothered Though?

That killed me yesterday.

You would have thought that Arsenal were playing in a pre-season friendly the way they performed.

Arsene Wenger described the performance as 'flat'. Well I'd use another term to be honest. Very shit.

And that's being generous too.

I can't believe that the players were not up for this game. It was the start of a run of cup-finals and just like the Carling Cup final we didn't turn up.

In the past Wenger has always advocated that this Arsenal squad has strong 'mental-strength'. They just drive me mental.

I will always support any player wearing an Arsenal shirt and I try my best to be upbeat in any given situation but yesterday I couldn't defend them.

The way the players strutted about made me feel more deflated than Donatella Versace lips after someone has attacked them with a pin.

Did they really care? Do they care enough? They talk a good game that's for sure.

I'm not going to jump on the Arsene Wenger out band-wagon that is gathering pace quicker than Road Runner can do the 100 metres but he needs to do something before its too late.

I know he isn't Merlin but we need him to do some magic.

The attitude of these players at the moment has to be questioned. I can't work whether they are bottle-jobs or just not bothered enough.

They are running out of opportunities and I'd say we are in last chance saloon now.

I really hope they are hurting like us Gooners are right now. They don't get the stick on a Monday morning at work like we do.